And the Reubenites and the Gadites gave the altar this name: A Witness Between Us that the LORD is God. -- Joshua 22: 34 (read here) 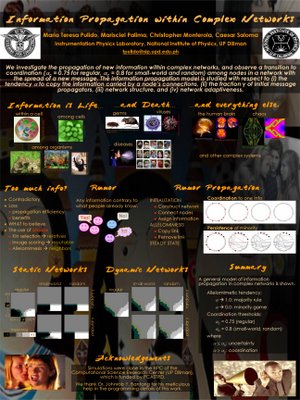 this was my poster during the recently concluded 24th Samahang Pisika ng Pilipinas (SPP) conference held in Davao, Philippines. it is a testament to how blessed i am, research-wise :)


counting our blessings is very comforting...but also time-consuming! :D i mean, where will we stop right? i'll stop here, but really, we know there are so much more blessings than this poster can attest to :)
2 comments

there is a particular piece of information that, when released to the public, might cause them to think the wrong thing. "wrong" as in (a) i'm doing wrong, and/or (b) it's not true.

will i make other people stumble in their spiritual journey because (a) of the wrong i'm doing, and/or (b) of some incorrect information?

for much of my early, godless (or, having-my-self-as-my-god) years, i simply didn't care what others thought. (exactly why they call it living for yourself.)

now, in this particular situation, i realize that i do care what others think: not so much that my reputation would be tarnished (golly!), but because of the possibly destructive effects on themselves.

it's bad enough that i would cause them to stumble...
...worse that i did not intend for it to happen...
...worse than worse, when it's because of something that isn't true anyway.

"what would other people think?"

now that doesn't sound too selfish after all.
0 comments

Email ThisBlogThis!Share to TwitterShare to FacebookShare to Pinterest
Labels: light

whenever there's something really MAJOR that has to be done, i always approach it in stages:

suddenly, i find i have time to thank God :D

because i find another bunch of reasons why :D

Email ThisBlogThis!Share to TwitterShare to FacebookShare to Pinterest
Labels: thanks, times

Our love, his trust
I might as well take a gun and put it to his head
Get it over with
I don't wanna do this
Anymore
Uh
Anymore (anymore)

No no no no

I am a thief, I am a murderer
Walking up this lonely hill
What have I done? I don't remember
No one knows just how I feel
and I know that my time is coming soon.

It's been so long. Oh, such a long time
Since I've lived with peace and rest
Now I am here, my destination
guess things work for the best
and I know that my time is coming soon.

Who is this man? This man beside me
They call the King of the Jews
They don't believe that He's the Messiah
But, somehow I know it's true.
And they laugh at Him in mockery,
and beat Him till he bleeds
They nail Him to the rugged cross,
and raise Him, they raise Him up next to me

My time has come, I'm slowly fading
I deserve what I receive
Jesus when You are in Your kingdom
Could You please remember me
and He looks at me still holding on
the tears fall from His eyes
He says I tell the truth
Today, you will live with Me in paradise
and I know that my time is coming soon
and I know paradise is coming soon.
0 comments

Don't know about you, but I'm sure He died for *me*


I heard a man explaining
(they said his name was Paul)
how Jesus, on that fateful day,
had died to save us all.

I found it hard to follow
His fine-spun theory,
but I am very, very sure
He died that day for me.

Email ThisBlogThis!Share to TwitterShare to FacebookShare to Pinterest
Labels: poems, sacrifice, save, Savior

i have this great book which is a collection of writings, art and photographs about Jesus while He walked the earth. it's called "He Touched Them" (a slightly different version is found here in Amazon). (the treasures you find in secondhand book stores! i was drawn to it as soon as my eyes caught the title.)


the following excerpt was taken from Francois Mauriac's "The Life of Jesus". i believe this is an example of "consecrated imagination" or something like that, where the writer embellishes the Biblical account, which may or may not be true but can be respected as "an educated guess". :)

For the complete account about the rich young man, go here.

"Jesus looked on him and loved him."
After having looked at him...a certain expression touched the Son of Man, the grace of a young person, the light in his eyes which came from the soul. He loved him therefore, and like a God to whom all are subject, without preparation, almost brutally, He said:
"One thing is lacking to thee: go, sell all thou hast and give to the poor --- and thou shalt have treasure in heaven --- and come, follow Me."
If Jesus had not loved him . . . no doubt He would have granted this young man the strength to leave all, as others had done. He would have submitted him to all-powerful grace. But love does not wish to obtain anything from him who is loved, unless it be freely given. He loved this stranger too much to capture him by force. From him the Son of Man hoped for a spontaneous movement of the heart. "But his face fell at the saying, and he departed grieved, for he had great possessions."
He was swallowed up in a crowd and with His eyes Jesus followed him far beyond space, into the depths of time, from misery to misery. For those whom Christ calls and who turn away, fall, lift themselves up, drag themselves about with eyes full of heavenly light, but with their garments stained, their hands torn and bleeding.
The sorrow which Jesus felt betrayed itself in the vehemence of [words] against the rich, which fell almost immediately from His lips. "With what difficulty shall they that have riches enter the kingdom of God...easier for a camel to pass through the eye of a needle."
Who, then, can be saved? Torturing thought for the saints themselves. His friends' sadness touched Jesus. Because He was the Son of God, the Author of life, He was going to destroy with one word all that He had said (perhaps He also saw in spirit that final moment when the young being who was turning away would come back to Him of His own accord). "With men it is impossible...all things are possible with God." Even to save as many rich men as He pleased to save, even to bring back those creatures who have fallen the lowest, to take them by force, to gather to Himself a soul, still begrimed, from the lips of a dying man. All things are possible with God; this is literally true as all the other words of the Lord. All! He had already said: "I will draw all men to Myself!" O, divine and hidden stratagem of that mercy which knows no control nor limit! All things are possible with God.
0 comments

Take My Life
by Chris Tomlin

Take my life and let it be
consecrated, Lord, to Thee.
Take my moments and my days,
let them flow in ceaseless praise.
Take my hands and let them move
at the impulse of Thy love.
Take my feet and let them be
swift and beautiful for Thee.

Take my voice and let me sing
always, only for my King.
Take my lips and let them be
filled with messages from Thee.
Take my silver and my gold
not a mite would I withhold.
Take my intellect and use
every power as You choose.

Take my will and make it Thine
it shall be no longer mine.
Take my heart it is Thine own
it shall be Thy royal throne.
Take my love, my Lord I pour
at Your feet its treasure store