For this season, Faithfulness

The word for this season is FAITHFULNESS.

"You may rely on the Lord, but may He rely on you?" (Elizabeth George)

Faithfulness means being steadfast regardless of circumstances and emotions.

It also means being full of faith in the One who is empowering you to do what He is calling you to do. :)
0 comments

is back in a relationship with FB

Less than forty-eight hours after I said goodbye to Facebook, I was back. 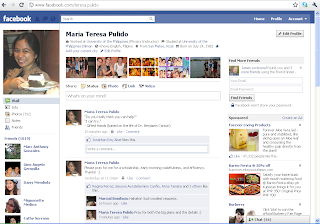 But I learned much from the separation and am glad for the time apart, and glad as well to be back. Why?


Congratulations to me, and I pat myself on the back. I thank God that this cool-off time has been very fruitful, and that the rehabilitation time was extremely short.
And now, goodbye. Logging off both Facebook and Blogspot. Back to work, the work that God has called me to do, the work that I am finding much joy (again) in doing. :)
4 comments

According to my imaginary friend

So if I believe my friend
then I should not believe him
since I can imagine a world without him
and therefore, according to him... he doesn't exist...?

I know my friend exists
(though I can't say much for his logic)
Why would he rather accept the ridiculous (reasoning)
than acknowledge the obvious?
What great lengths will he go to
to convince himself there is no God?
How long will he live in his imaginary world
instead of accepting reality?

May they do the same to him.
0 comments

Email ThisBlogThis!Share to TwitterShare to FacebookShare to Pinterest
Labels: philosophy

On predictions and prophecies

I am writing this in response to a colleague; there was no opportunity to reply then. Hopefully that person would get to hear my side here.

Immediately the statement sounded strange to me. The sentences were not logically parallel; what appeared to be a comparison or a contrast turned out to be neither. So what is the message?

Also, the second half of sentence 1 can also be used in sentence 2. Modifying, we have:

The version above is obvious, and the statement unnecessary, which is exactly my point. Why say sentence 1 at all?

More importantly sentence 2 points to a dismissal of all predictions. Here's the clincher: The statement gives the appearance of equality and logic, but actually gives the message that "There's no such thing as a correct prediction."

The statement actually points to the speaker's bias.

There are instances when the persons being predicted on (1) have no information about the prediction, (2) have no ability to fulfill it, or (3) have no incentive to fulfill it. Improbable, yes, but not impossible, and this is how cynics (whether honest or biased) turn into the most ardent believers.

Of the estimated 2500 prophecies contained in the Bible, about 2000 refer to past historical events, and all of which have been successfully fulfilled. Crazy? Just self-fulfilling?

Remember that some persons being predicted on...

(1) have no information about the prediction: There are predictions made about people living in a different place or time, such as when Xerxes was foretold 180 years earlier that he will release the Jewish people.

(2) have no ability to fulfill it: When people successfully predicted famine, or birth from previously barren women (or even from a virgin), these predictions cannot be considered "self-fulfilling".

(3) have no incentive to fulfill it: Many times the Jews were warned that they would be conquered by rival nations, and they were. Specifically, the capital city of Jerusalem was predicted to fall after the arrival of the Messiah; this occurred in 70 A.D.


Predictions can be successful and not just by chance. We can make educated guesses, compute the most probable outcomes, and so on.

When a prediction is made by the Almighty, He will make sure it will come to pass. And if the prediction does come true, it can be termed a self-fulfilling prophecy --- only because (1) prophecies are defined as messages from God, and (2) the Almighty is perfectly capable of doing as He said.

God's messengers can only deliver the message, including predictions. A mere messenger cannot fulfill the message he is carrying.

How ironic. What was intended as a dismissal of God's message ("Oh, that's just a self-fulfilling prophecy...") turns out to be proof undeniable of God Himself.

To rephrase my colleague's statement:

"Throw away whatever gets in the way..."

Anything that gets in the way of me worshipping God, following Him, and living for Him.

In the past, I had to burn my dearest comic books. Emotionally, financially, psychologically, they were dearest to my heart. And that is why they had to go --- I needed to discard my childhood heroes so I can finally give my heart to the Almighty One.

Comic books are not in themselves evil, are they? In my case, it came to that point --- they were "pulling" me away from Him, and I had to make a choice.

Four years later, I am completely rehabilitated from comics. I can enjoy them disinterestedly; they can even inspire me to the point that I am reminded of God Himself. As far as I can tell, I am no longer in danger of an unhealthy addiction to comic books.

But it is no surprise that other false gods beckon. Is it part of the enemy's schemes? My weakness? A test from Him?

Do the reasons really matter as much as my making sure that He's No. 1?

Today I deactivated my Facebook account. It's not that much of a deal for me, since all my files and information are preserved and I can reactivate my account any time I choose. But on the other hand, it is a big deal; I mingle with my FB friends on a near-daily basis, and even when I log out I am updated of their actions. The two-way silence will take some getting used to.

Facebook is not evil in itself, is it? Yesterday in particular, I found that I am increasingly being affected by the increasingly mundane. Drowning in a sea of people's voices, should I even wonder why I don't hear Him as often?

Plus, even if I share about God via Facebook, ultimately I would be dishonoring Him if I don't do what He is specifically calling me to do.